On 10 and 11 February 2022, an experienced FOUR PAWS team undertook the biggest bile bear rescue mission to date – and changed the lives of nine bears forever!

Vui, Nui, An, Teo, Tai, Tin, Khoi, Danh, and Thi were kept on three different farms in Binh Duong province, suffering terribly from the cruel bile extraction for more than 17 years. In tiny cages, only surrounded by metal bars and barely enough space to move, the Asiatic Black bears were living far from their natural needs. Fortunately, this is over now.

A 42-hour journey to freedom

Due to the pandemic, the rescue mission was delayed, but finally on 10 February, our rescue team started their mission which would take several days. After travelling 1,600 kilometres to Binh Duong province, the team rescued six bears from two farms on the first day – Danh, Thi, Teo, Tai, Tin and Khoi. The females Danh and Thi, who were rescued from the first farm, were in very poor condition. Suffering from the usual bile bear health issues, like gastritis, gallstones and kidney problems, they will be under close surveillance and receive intensive care.

On day two, when arriving at the third farm, our team was shocked: bears Nui, Vui and An have lost significant weight since our pre-visit in 2021. Clearly, our help was urgently needed.

All the bears received first vet checks and were provided with fruits, water, fresh showers and straw. Then, finally, their journey to a new life began. It was a long trip but after 42 hours all the bears arrived safely at BEAR SANCTUARY Ninh Binh, their new forever home. Here, they will get all the love and care they deserve. Soon, when the bears will be released from quarantine, they can start exploring their species-appropriate surroundings.

Emaciated when she was found, Vui is now happily trying out new foods. She loves anything sweet and enjoys her post-meal naps.

When she was found, Nui only weighed 50 kilograms. Now she is doing well. Always hungry and very clever, she gets excited when it's feeding time and she has been trying lots of new foods.She is the only bear who eats her carrots.Nui is very clever and was the first bear to break into a coconut.

An is a very opinionated bear and lets the caretakers know when she’s not happy. Despite only having three legs, she is doing very well and is enjoying getting three regular meals a day. She is excellent at destroying her enrichment, particularly banana tree trunks.

Despite not having any dental issues, Teo doesn't eat any whole vegetables, so his caretakers blend them for him. However he eats all of them in liquid form and he loves big ice blocks.

Tai is an easy-going and friendly bear. When it comes to feeding time, he gets very excited which he expresses by splashing his paw in his water bowl – keeping his keepers busy!

Tin is the most playful of the bears – even on his first morning in the sanctuary, after the 42-hour journey, he was rolling around and playing with his bedding right away. Now he enjoys keeping himself occupied by playing with empty coconuts, kongs or hessian bags.

Like Teo, Khoi only eats his food in liquid form. He loves peanut butter and he also enjoys big fruit ice blocks, dog food and eggs.

Danh is the best nest maker out of all the bears! When it comes to food, the female bear is a little more adventurous than Thi and, besides dog food, chicken and pumpkin, she recently started to eat watermelon too.

Together with Danh, Thi was rescued from a private home. Thi is the fussiest eater: She only eats boiled chicken and raw pumpkin! She is very sensitive and doesn't see well.

Nui: Nui is doing very well; she is always hungry and has been trying lots of new foods. She is the only bear that eats her carrots. She gets very excited when her caretakers arrive as she knows it’s feeding time. She will whine for food, so we give out her morning smoothie first so that she settles down quickly. She is very clever and was the first bear to manage to break into a coconut.

Vui: Vui is still quite nervous around her caretakers, but she is taking everything in her stride. She is happy to try new foods, but she really enjoys eating anything sweet. She has started interacting with her enrichment and settles down well between feed times and enjoys her post-meal naps.

An: An is a very opinionated bear and will let you know when she’s not happy. Despite only having three legs she is doing very well and is enjoying getting three regular meals a day. She is excellent at destroying her enrichment, particularly banana tree trunks, which she shreds into small pieces and incorporates into her nest.

The team has moved the three girls close together as they came from the same farm and were able to see each other. We hope that this will be the first stage in their integration and that they can be physically introduced once they are moved into the bear houses.

All three bears moved to Bear House 3 and are doing really well. They are very smart, and An is the only new bear so far to learn the automatic water drinker. They are kept occupied with enrichment, and they are adept at puzzle feeders and manipulate them dexterously to dispense their contents. Nui and Vui both found out this week how comfortable a hammock is. They all eat most of their vegetables although each has their own preferences. They are always very enthusiastic about food, no doubt due to being starved in the past, and they love coconuts. During the vet checks it was good to see that each one had gained a couple of kilos.

During their time in quarantine, the onsite team soon realised that Danh and Thi were very sensitive bears. They decided to move them into Bear House 1 as it is the smallest house with fewer bears. Most of the bears in this bear house are also older females who enjoy peace and quiet and so it made sense that Danh and Thi would fit in well here. Whilst the pair were in quarantine, their caretakers had been building a relationship with them using their favourite food, chicken. This time and effort paid off once they moved to the bear house as they were still happy to come over to their caretakers for a piece of chicken, which made it much easier to move them between dens during their daily husbandry routine.

They spent their first week becoming accustomed to their new surroundings. This was especially important as we suspect that they both have limited sight, so they are easily startled and have to rely on sound and olfaction.

Once their caretakers were happy that the pair had become comfortable with their new circumstances, they decided to integrate the pair as they had seen no aggression between the two in quarantine.

The animal caretakers started by feeding them next to their adjoining slide in the hope that they would notice each other and interact. However, Danh prefers to take her meals back to her nest which means the team always has to fish the pumpkin crumbs out of her straw every morning!

The next stage of integration was to open up the dividing slide and let the pair meet physically. As with everything Danh and Thi do, this was a rather steady and uneventful process. It took Thi quite a while to even realise that there was another bear in the same room as her! However, after the initial couple of meetings, they were co-operatively feeding from their caretakers side-by-side and had even swapped nests.

They had just spent their first night together and the next morning they were found fast asleep in their nests which they had moved to the sunspots in the dens.

Thi only eats boiled chicken and raw pumpkin. She doesn’t eat anything else, even honey or fruits. Danh eats dog food, chicken, corn and pumpkin. She is a little more adventurous than Thi and recently started to eat a bit of watermelon too. 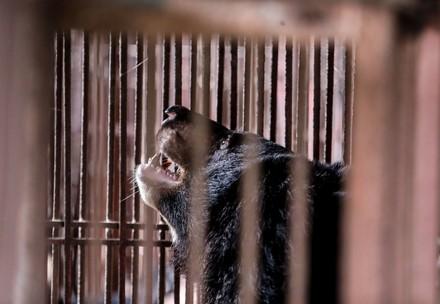